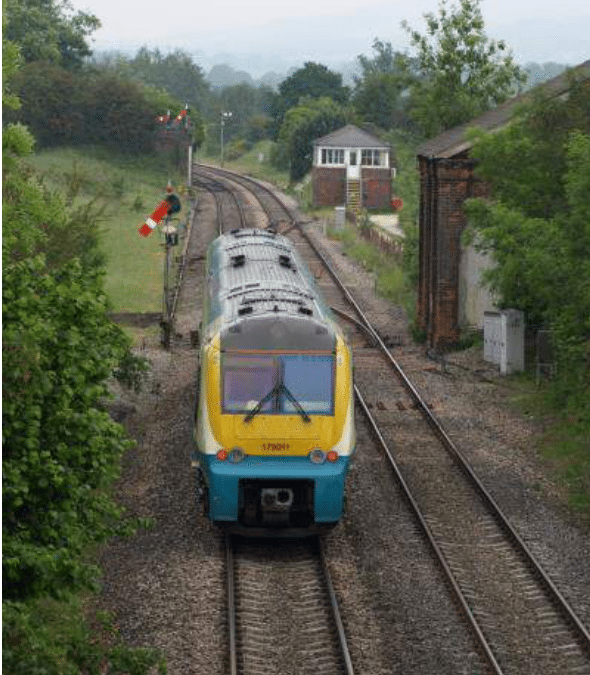 At this stage of the franchise process, four bidders are in the running for the Wales & Borders Franchise to be awarded in 2018. All four were keen to meet with representatives of the Marches Rail Users Alliance (MRUA) which includes Rail & Bus for Herefordshire (RBfH). The franchise is being administered by Transport for Wales, an arm’s length company of the Welsh Government. Accordingly, during December Chris Clarke (Vice Chairman of MRUA) and myself as chairman of MRUA and RBfH arranged four separate meetings in Hereford.

Who will be the next Wales & Borders operator? Arriva Train Wales northbound service passes the site of the once Woofferton Junction between Leominster & Ludlow.

The four TOCs in the running are:

Following the discussions with stakeholders, which includes ourselves, all four will by now have given their outline proposals to Transport for Wales. The final bidding phase of the franchise process will then commence and the shortlist may be reduced. All the companies representatives were keen to point out they wanted to see a massive improvement in the quality of all aspects of the service offered. They wish to give an improved service with new trains providing a good quality service with better station infrastructure. They all stated that the new franchise would not be restricted in its ability to cater for growth and improvements, as is the case with the current franchise.

The MRUA emphasised that the Marches area is in a process of development as stated by the Marches Local Enterprise Partnership who see rail improvements as essential to future economic and social growth. A number of key matters were highlighted by MRUA as needing urgent attention in the new franchise. These are:

All four bidders were receptive to our comments and suggestions but did point out that improvements would not be immediate from commencement in October 2018. The MRUA recognise that most improvements will take a time to introduce but did request that the new franchise document should give clear and firm dates as to a programme for these improvements.

Since the meetings with the bidders the House of Commons Welsh Affairs Committee has met to debate the transfer of the franchise to the Welsh Government. Significantly in its conclusions and recommendations there appeared the following:

Article based on notes of meetings prepared by Chris Clarke, Vice Chairman of the Marches Rail Users alliance