In 1981, Hereford & Worcester County Council successfully applied to make most of Herefordshire a “Trial Area” for the deregulation of bus services that was then being considered and which was eventually rolled-out on a national basis five years later.

The trial brought a large degree of instability to the bus network, with competing operators on the busier Hereford City routes, whilst rural services changed hands frequently as subsidies were only awarded after competitive tender.

Many of the new, smaller operators didn’t bother to produce printed publicity and the introduction of competition led to frequently changing timetables as the larger companies fought to stay ahead of their new competitors. What had once been comprehensive, area-wide timetable books issued by the larger operators – some of which included smaller operators’ services – became a series of individual service leaflets, frequently re-issued as services changed to meet the increased competition. Rural services, now often operated by smaller companies had no publicity at all.  It all made finding out when and where the buses ran much more difficult.

The County Council’s response was to issue a series of the own timetable leaflets covering services in the Trial Area provided by all the competing companies, extending them to Worcestershire when national deregulation followed in 1986.  By today’s standards they were primitive affairs and their production was time-consuming and inefficient.  Staff in the Public Transport Unit at County Hall in Worcester would produce handwritten drafts, which were then sent to the typing pool to be typed-up in the standard format. After checking – and possible re-typing – titles and other details needing larger print were added by “Letraset”, which involved using pre-printed individual letters of the alphabet arranged into words and then impressed onto the paper by hand by a means not unlike brass-rubbing!  The master copy would then be laid out and sent downstairs to the reprographics unit for photocopying onto coloured paper and folding to make an A5 size leaflet, which in the circumstances was surprisingly readable!

After the initial surge of competition, things gradually returned to normal and services became more stable. The County Council was able to move to a smaller number of larger, area-based timetable leaflets issued less frequently and eventually to a series of 8 timetable books, three of which covered Herefordshire services.

By this stage timetables could be arranged in service number order. Herefordshire’s indigenous bus operators had never used numbers to identify services, a practice confined to larger companies such as Midland Red and Red & White.  It was only when Hereford & Worcester County Council decided to produce a county bus map in the early 1990s that a system of service numbers was agreed with operators which is still in use today.

Technological change also led to improvements in presentation, which was further improved when professional printing firms were brought in.  The Public Transport Team still produced the base timetables, but now using computers rather than pencil and paper and the finished drafts were  forwarded electronically to the printer, returning as finished books a week or two later. Professional cartographers were brought in to improve the quality of maps, which had previously been hand-drawn by non-specialist technicians.

When Herefordshire regained its independence in 1998 the new Herefordshire Council opted to retain the three area books, which covered, respectively, Hereford & Bromyard, Leominster & Kington and Ledbury & Ross-on-Wye.  With funding now available from the new government’s Rural Bus Fund it was possible to bring in further improvements such as colour photos on the covers, better illustrations, full-colour maps and a switch to a typeface based on that used by London Transport, at that time acknowledged leaders in the field of bus publicity.  In 2002, the Queen’s golden jubilee was commemorated with special editions bearing (with permission) the royal crest on the covers. A history of bus services in the county over the 50 year reign of Her Majesty was included. A few years later, with Herefordshire having become a temporary home to large numbers of seasonal workers from eastern Europe, a page was added giving information about how to use the county’s bus services in a number of appropriate languages.

By now most on-road competition had disappeared and agreement was reached between the council and bus operators to restrict timetable changes to just six days a year – later reduced to four. This allowed the timetables to have a definite “use by date” rather than being described as valid “until further notice” and made it possible for passengers to ensure they always had the latest edition. Timetable books could now be produced just once a year – leading to a saving in cost – with amendment leaflets issued on the four change-dates that were listed in the book. There was now no excuse for having an out-of-date edition.

The final step in this evolution in 2011 was to amalgamate the three area books into one county-wide publication. This cut unnecessary duplication where services ran through more than one area and made it easier for the libraries, tourist information centres and village shops that were used for distribution.

All this hard work did not go unnoticed. Sales remained steady, despite price increases and the availability of timetables on the internet. The county won plaudits from a leading expert on transport publicity who described the publications are “some of the best in the country” and “produced to a surprisingly high standard for a rural county”.  The high quality of information, supplemented by an increasing number of roadside timetable displays at bus stops and a bespoke internet Journey Planner all contributed to a significant increase in passengers carried on rural buses throughout the first decade of the twenty-first century, although Hereford’s commercially-operated city buses were in decline.

Production of publicity for bus services took up a lot of staff time in the small team employed by the county council, whilst underpinning the remainder of their work. Because of the need to ensure accuracy, staff at all levels had to maintain a close working knowledge of the whole of the county’s bus network, even that part of it that operated commercially outside its direct remit. The in-depth knowledge held by the team followed through into the planning of tendered services, provision of bus stops, management of the bus stations in Hereford and Leominster, monitoring of bus operation and management of the concessionary travel scheme all benefiting.

No doubt higher management in the county council had its reasons to bring all this to an end, although cost savings are the only justification put forward. It is true that the sales income did not meet the printing costs (it was never intended to make more than a contribution) but no attempt appears to have been made to quantify the extra fares income generated by people making journeys they only found were possible through the timetables.  The timetable files themselves still have to be maintained, to feed into the Traveline website so the saving in staff time is also limited.

Herefordshire is not alone in this, other authorities and bus operators have also stopped producing paper timetables with the excuse that “it’s all online”.  Try telling that to the hapless would-be passenger at a rural bus stop with a fading mobile ‘phone battery and an even fainter internet connection! 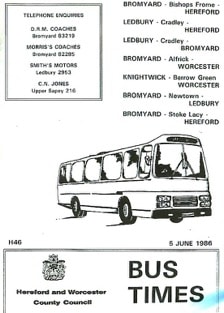 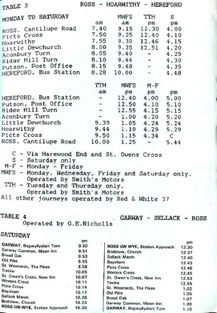 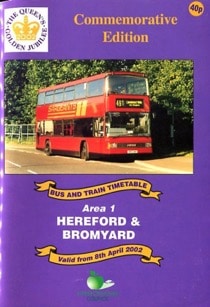 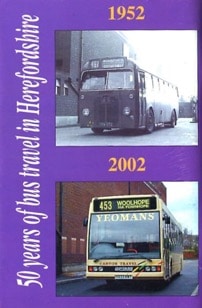